The hills are alive with eine kleine Figaro

Every tourist destination has its clichés, and usually one dominates all others: London has Big Ben, Paris is the Eiffel Tower, and who could imagine New York without the Statue of Liberty?

Salzburg has two.  As soon as you get off the train at the Hauptbahnhof, you are bombarded with two images that stay with you throughout your visit: The Sound of Music and Mozart.  Sort of When Maria met Wolfgang.

I really liked the film about the Von Trapp family and their multi-talented governess, and I have never fallen asleep at a Mozart opera.  But I started to get irritated when my subconscious singing switched constantly from "The hills are alive with the sound of music..." to "Doe, a deer, a female deer..." and on to the overture of The Marriage of Figaro, with occasional snatches of Eine kleine Nachtmusik.

Relief came only with the train out of town, back to Munich and its large repertoire of clichés.

Thankfully I don't know any songs about beer, sausages and sauerkraut.
Posted by Páraic Maguire on Wednesday, August 20, 2014 No comments:


He was not a police officer or a customs agent. And I'm sure there was a "please" in there somewhere...

After a leisurely promenade through the pools of varying temperatures (from 20°C to 40°C) at the Széchenyi Baths in Budapest, I was asked if I'd like a man or a woman.

The full package includes a one-hour massage. The women do a rather gentle job with perfumed oils, while the men rough you up good (I'm paraphrasing the explanation). "I'll take a man, so."

And boy, did he do a good job! I usually expect to doze off towards the end of a massage, but not this time. I got a thorough work out from head to toe, front and back, all in perfectly good taste, needles to say. He discreetly adjusted my swimming shorts to give maximum exposure, all the while maintaining a professional level of decorum.

He released me into the relaxation area where iced tea and fresh fruit were available à volonté. After a relaxing break, it was time to try the outdoor pools to see if my muscles still worked.
The atmosphere outside is quite different; definitely more beach than spa.

Since I didn't manage to get my annual sea swim this holiday, this was the next best thing. 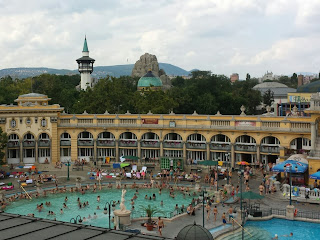 She wasn't even wearing a mask!

Arriving in Budapest airport last night I hadn't a forint to my name, so I joined the queue at the pénzválto to change some cash to be at least able to pay the bus fare into town.

So they'd give me 247 forints for €1, but it would cost me 344 forints to get my €1 back. No wonder they can charge zero commission with a spread like that!

A quick internet check – now that I'm back in the EU I can surf with my phone without it costing a fortune – showed the official rate to be 313 forints to 1 euro.

The large print giveth,
And the small print taketh away!

I left the queue and took money out of an ATM. The machine offered me two options: take the "guaranteed" rate of [I can't remember] or let my bank decide. I chose the latter. Let's hope!

And the smiling lady behind the window didn't look at all like a robber.
Posted by Páraic Maguire on Thursday, August 14, 2014 No comments:

The Serbs were awarded the role of Bad Guy during the wars that broke up Yugoslavia after Tito's death. With leaders like Slobodan Milošević, Radovan Karadžić and Ratko Mladić, you can kind of see why.

NATO bombed Belgrade – without UN approval – in 1990.  Visiting the city today you wouldn't see much damage as they've done a lot of development since, but there are still traces.  One fairly big building near the centre in still a bombed-out carcass.  Presumably they left it as a reminder of darker days.

The city itself is interesting, though not beautiful in my opinion.  In that way it reminds me a little of Nantes: you don't go there for the architecture, but for the atmosphere.

The street I stayed on is in a pedestrian zone, well supplied with cafés, bars and restaurants.  The prices are great value by western European standards: a nice three-course meal, with aperitif, mineral water and two glasses of wine for around €25.  And there are many cheaper options.  A coffee and a cognac on the way home at midnight cost me €5.

And they're really nice people now that we've put manners on them!
Posted by Páraic Maguire on Thursday, August 14, 2014 No comments:

One detail I forgot to mention when writing about Esfahan in Iran is its impressive bazaar. It winds through covered passages for a considerable distance between Lotfallah mosque and Jameh mosque. Even if you don't intend to buy anything, it provides welcome relief from the oppressive heat outside.

But if bazaars are what you like, you ain't seen nothin' till you've seen the bazaars of Istanbul!

Last week I had a first taste, accompanied by George. We arrived late-ish so we didn't have time to really explore, though I did manage to buy a carpet (see previous post on that subject: http://iranturkey2014.eblana.eu/2014/07/unexpected.html).

Today, on my last day in Istanbul, I decided to investigate further.

Wow, it's big! Or rather, they're big. Between the Grand Bazaar and the Egyptian Bazaar there is an unbelievable maze of stalls selling everything you could possibly expect in a market, and more. You want clothes, food, carpets? No problem! But what about kitchen taps, car parts or solar panels? They've got it!

You could spend days wandering the alleys if you were curious enough, and a fortune if you weren't careful.

I visited this time with my eyes agog, but left with my wallet unopened.
Posted by Páraic Maguire on Saturday, August 09, 2014 No comments:

Turks are really proud of Kemal Atatürk, the man who led the country to independence after the post-Ottoman land grab by European powers. He also firmly established the secular values of the new republic, whereby people practise whatever religion or superstition they like at home, but keep it out of the public arena, and certainly out of any state function. Sound principles, in my opinion.

You see pictures of Atatürk everywhere: in shops, hotels, restaurants, even in buses taxis.  There are buildings, roads and public utilities named after him.  This is something he has in common with the current great leader, Recep Tayyip Erdoğan.  This wannabe sultan's face is all over the place! And his name is appearing disturbingly frequently on the name plaques of new public constructions.

He is a very wealthy man, his fortune allegedly coming from kick-backs from builders. Planning laws are no problem when it comes to building what he convinces the people they need: more mosques and shopping centres.

Recent protests have shown that people are on to him, however.  He wanted to demolish one of the few green spaces in Istanbul – Gezi Park, the small garden in Taksim Square – and build a shopping centre. As if the city needed another one!

Now that he's going to be elected president he will probably achieve his goal of building the "Recep Tayyip Erdoğan Shopping Mall" on the site of Gezi Park.

At least Atatürk had the decency to die before buildings were named after him.
Posted by Páraic Maguire on Saturday, August 09, 2014 2 comments:

Carved on a hillside on the Gallipoli peninsula, facing the town of Çanakkale, are these words:

Stop, traveller!
This ground you tread
Unawares
Is where an era ended.

The Gallipoli Campaign was an imperial bloodbath that cost the lives of hundreds of thousands of men.

The beginning of the end of several empires: British, French, Russian, German, Ottoman.
Posted by Páraic Maguire on Monday, August 04, 2014 No comments:

I've spent three weeks travelling with my old friend, Gökçe (a.k.a. George). Drinking buddies for more than a decade, we often talked about visiting his country. We finally got around to it this year, via Iran.

He's been a very useful travelling companion: he speaks Turkish like a native (mainly because he is one); he knows the customs of the country (urban and rural); and he's a good planner.

But apart from his usefulness, his passion for history and ancient civilisations led me to see many interesting things I might not otherwise have seen: Zoroastrian temples outside Esfahan and Yazd in Iran; an Armenian cathedral on an island in Lake Van; a caravanserai in Diyarbakır; giant heads on a mountaintop in Adıyaman; cave-churches in Cappadocia.

But it wasn't all one-way traffic.  Without my insistence, for example, he wouldn't have spent over 40 hours on shitty trains with bad food and spectacularly inefficient organisation. So let's say we both inspired new experiences.

Poor George had to fly back to Paris this weekend for work. Meanwhile I'm continuing the adventure solo. Right now I'm in Çanakkale watching the sun set over the Gallipoli peninsula, a short distance across the Dardanelles.

After all my years singing those songs...


Posted by Páraic Maguire on Saturday, August 02, 2014 No comments:

When is Çanakkale not Çanakkale?

When it's the bus station of that name!

I took a ferry across the Sea of Marmara this afternoon from Istanbul to the port of Bandırma to connect with a bus to Çanakkale, my final destination of the day.

The ferry lived up to its advertisement: modern and fast (two hours). And relatively cheap at 60 lira (€20) for a trip that would have taken many hours by bus at around the same price.

On arrival there was no indication to the bus station, though I could see lots of buses parked. I finally found an office and a helpful man who spoke English. I had to take a municipal bus to the bus station where I would get the required connection. I got there in about 15 minutes.

The bus to Çanakkale cost 25 lira (€8) and would take just under three hours.

When they say "to Çanakkale" they really mean to a bus station in the middle of nowhere, a 30-lira taxi ride from the town. Compare that to the price of the three-hour bus journey.

I think they must have borrowed the Ryanair naming method. ("Paris-Beauvais" airport is 90 kilometres from Paris.)

I quickly got over the annoyance when I saw my hotel. I booked it at the last minute for €40 per night (a "genius" rate on booking.com) based solely on on the review ratings .  It really is a four-star joint!

I'm sitting having a beer in the rooftop bar, watching the boats come and go in the harbour below.

Posted by Páraic Maguire on Friday, August 01, 2014 No comments:

Get updates by email